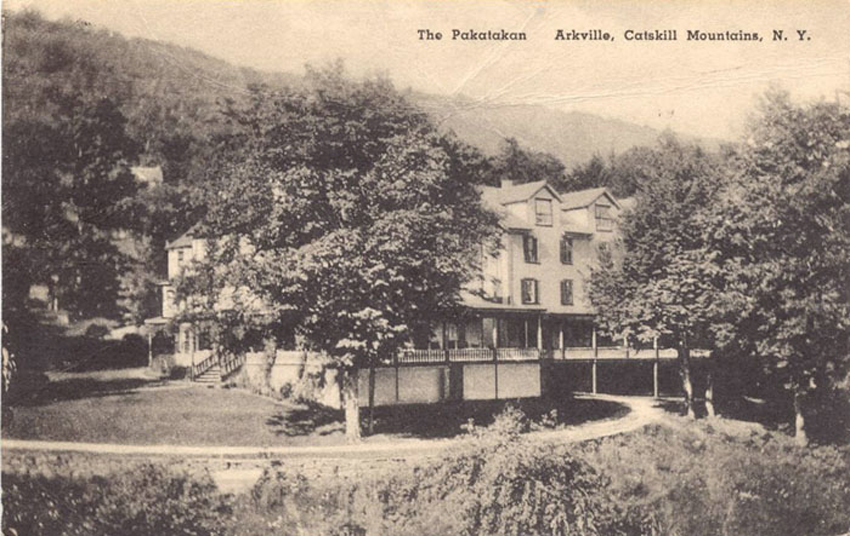 Arkville, a mile east of the Village of Margaretville on NYS Route 28, was one of the earliest commercial centers in Middletown. It got its name, so the story goes, following the “pumpkin freshet” that occurred soon after the return of the settlers at the close of the Revolution. Coming in the autumn, before the crops had been gathered, the flood floated pumpkins off the fields until the Bush Kill stream was covered by them. The elevated position of Simeon (Hendrick?) Von Waggoner’s tavern (now the site of the Erpf House on the knoll next to the Arkville Fire Hall) at the time of this flood suggested the name of Arkville. This property was acquired in 1826 by Colonel Noah Dimmick whose name may also have inspired the story of ‘Ark’ville.

Operated as a tavern by a Mr. Freer for several years, the property was bought in 1860 by J. Hopkins Dean and remodeled into a fine boarding house (many years later known as the Fairview House). From 1871 to 1875, the new Ulster & Delaware Railroad station was called “Dean’s,” or “Dean’s Corners.” The crossroads hamlet thus also became locally known as Dean’s Corners, but that name has faded while Arkville remains.

The Von Waggoner tavern/hotel is said to have been the first in Middletown and was the place where the town’s first and perhaps only Revolutionary War casualty occurred. A company of militia was sent in the summer of 1778 from Schoharie to scour the upper valleys of the Delaware, to arrest or drive out Tories (British sympathizers), and to destroy supportive Indian villages. The militia came upon settlers John Burrow and Harmonus Dumond, and “seeing them armed and refusing to halt,” they fired. Dumond was mortally wounded, and died in Von Wagoner’s hotel three days later, on August 29. Burrow escaped up Dry Brook and over the mountains into Shandaken. To this day there is some controversy over this tragic event which followed the departure of some of the first settlers who sought safety at Fort Shandaken and sanctuaries in the Hudson Valley.

One of the town’s original Dutch residents, Peter Hendricks and family, settled on what is now the Arkville Cut-off, or Crossroad, a farm inherited by his stepson Frederick Kittle and later owned by Noah Dimmick, a prominent local business owner and the community’s first postmaster, appointed in 1837. Noah kept the post office in his house on the knoll, and school was also held in this house until the first of three schoolhouses was built.

The Arkville Cemetery, restored in 2008 by the Historical Society, contains the graves of Hendricks, Kittles, Dimmicks and many other early inhabitants of this part of Middletown. 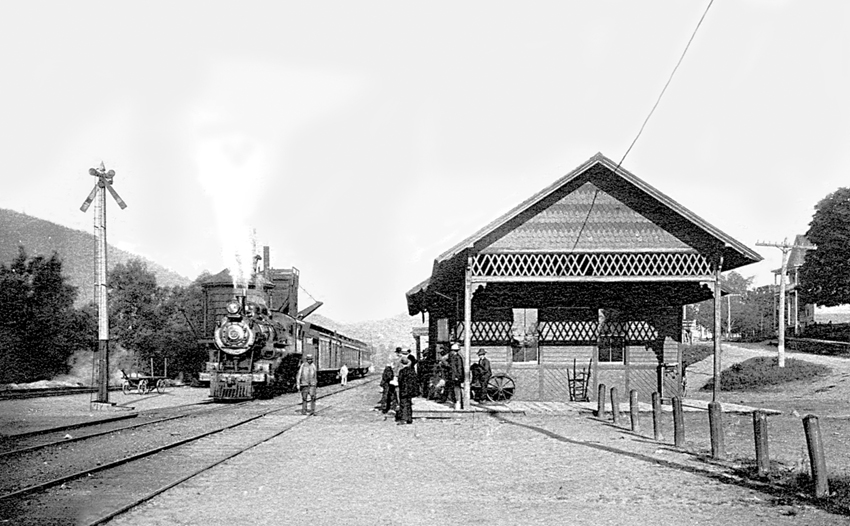 Arkville was a bustling business center that grew up on the Esopus and Ithaca turnpike, and later the Arkville and Delhi turnpike which was chartered in 1840 and completed in 1849. It extended from Highmount to Delhi. By 1871, the Ulster & Delaware Railroad had arrived. The first train stopped at the Arkville U&D station October 24, 1871. The U&D followed the Cross Road and headed north, paralleling the current NYS Routes 30 and 23, to Roxbury, Grand Gorge, Stamford, Hobart and on to Oneonta.

Thirty-five years later the Arkville station and railyard served as a transfer point for the Delaware & Eastern (later Northern) Railroad. The D&N took freight and passengers past the Cut-off Road to Margaretville and followed what is now NYS Route 30 South to East Branch. It operated through the 1940s. Arena and three other communities served by the D&N along the East Branch of the Delaware River were submerged beneath the waters of the Pepacton Reservoir, completed in 1954.

About 1900, a spur of the D&N was constructed to serve the Treyz/Luzerne Chemical Company on Pavilion Road in Arkville. This wood acid factory ran from 1900 to about 1920, producing charcoal, and chemical ingredients used in dyes, solvents, antifreeze, formaldehyde, and cordite. The factory consumed an estimated 5,000 cords of wood a year, trees cut from the forest on nearby Pakatakan Mountain, often by gangs of Italian immigrant lumbermen. In addition to the factory, the company built three houses for its officers, and maintained a company store for its employees in Arkville.

Up the Dry Brook valley were many water-powered grist, saw and woodworking mills. Another important industry based in Arkville was the B. J. Harrison Manufacturing Co. (chair factory), which became the Union Fork & Hoe Company (handle factory) and later the Arkville Wood Products factory that produced bats out of abundant ash wood. The Delaware & Greene Creamery (later Beakes and then Dairymen’s League) in what was known as Austin’s Bridge on the Cut Off Road (County Route 38) also gave local farmers a market for their milk. 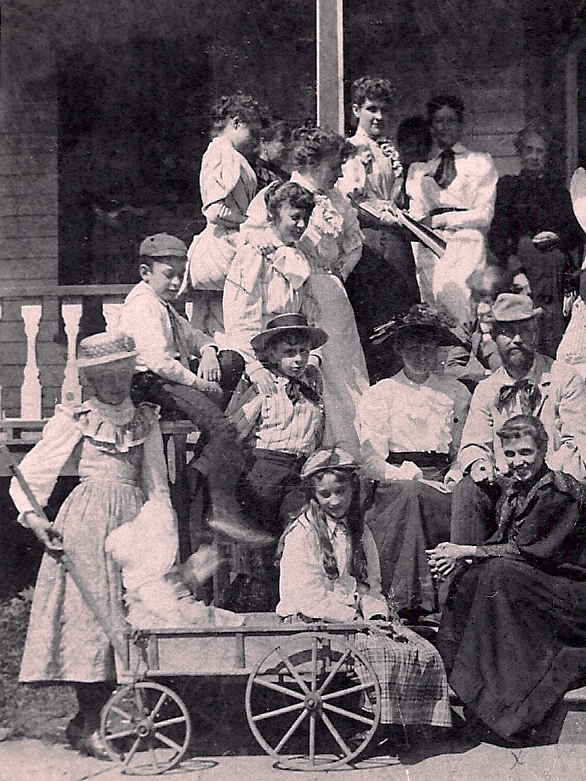 Arkville was also the headquarters for a group of prominent Catskill Mountain landscape painters from 1886 to 1921. The Pakatakan Artists Colony, located off NYS Route 28 just west of Dry Brook Road, contained the summer cottages and studios of 13 artists, including Alexander Wyant and J. Francis Murphy, both of whom are buried in Margaretville Cemetery. The colony developed around the Hoffman House, a hotel which was built in 1886 by Peter Hoffman, and eventually included 17 buildings, many of them shingle-style cottages that are occupied to this day. The colony is on the State and National Registers of Historic Places.

A nine-hole golf course on the south side of Route 28 abutting the inn and some cottages was built by the Pakatakan Association as the Pakatakan Country Club in 1923. It closed in 1948. Part of it is now the Arkville Trailer Park.

The first schoolhouse in Arkville was moved when the railroad came through. The second school was on a high bank of land opposite the depot. The third, the Arkville Graded School, was built in 1926 to teach primary and middle school students. Since 1964 it has served as the Arkville Fire Hall.

A focal point of the community was Todd’s Hall, built by Harrison Todd in the 1920s. This is the barn-like building at the intersection of NYS Route 28 and County Route 38. The 4,000-square-foot building was used as a dance, lecture and performance hall, basketball court, roller skating rink and bowling alley. Milton Berle, a nephew of Charles Glantz who operated the Fairview House (Noah Dimmick’s former home next door), performed there periodically.

A fire in 1939 destroyed four buildings, including the Post Office. Two more structures in that area were destroyed in a 1979 blaze.

However, the 1970s also saw the restoration of the former tavern/boarding house on the knoll. Purchased by Armand G. Erpf, the historic structure was renovated as the Erpf Catskill Cultural Center in 1975. The Catskill Center for Conservation and Development rented space in the building in 1980 and in 1993 the two groups merged into a single non-profit organization that continues to occupy and care for the most prominent building in Arkville.

Other community improvements were done by the Margaretville-Arkville (MARK) Revitalization Project and by local investors and business owners like Lynn Johnson. In the early 1980s, municipalities along the former U&DRR formed the Catskill Revitalization Committee which created a tourist excursion, the Delaware & Ulster Rail Ride based in Arkville, to once again carry passengers along the storied corridor.

ARKVILLE PHOTO GALLERY
Click for a larger view of each image… 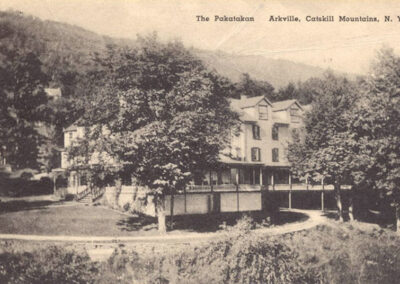 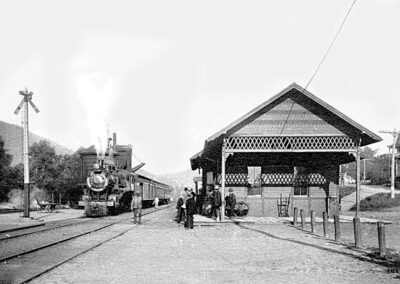 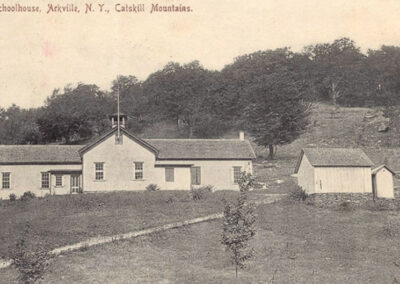 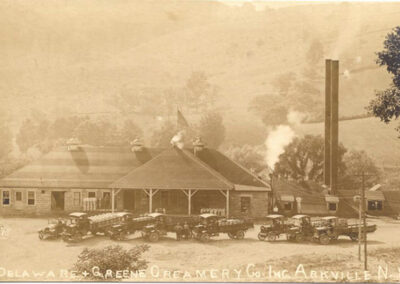 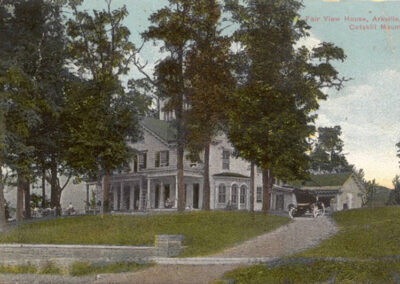 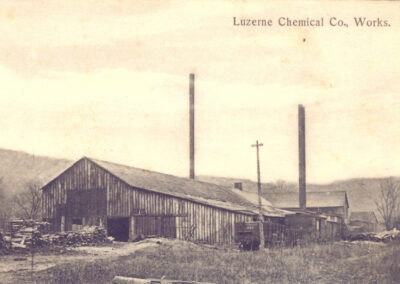 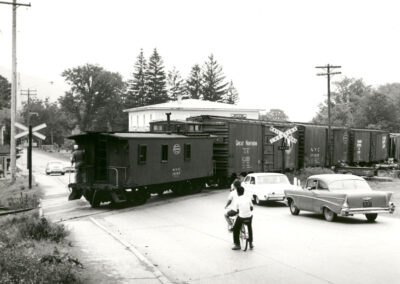 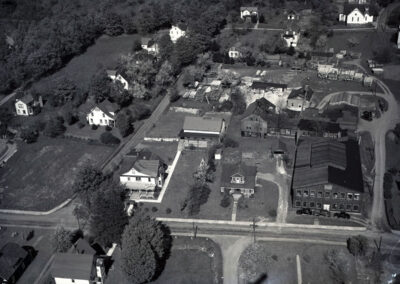 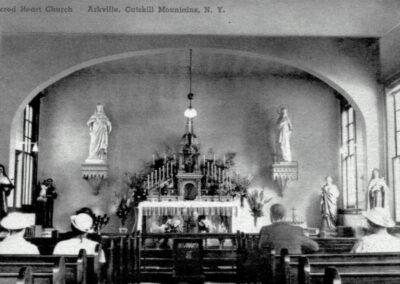 Sacred Heart Church, pre-1955, in what is now Maple House

Sacred Heart Church, pre-1955, in what is now Maple House 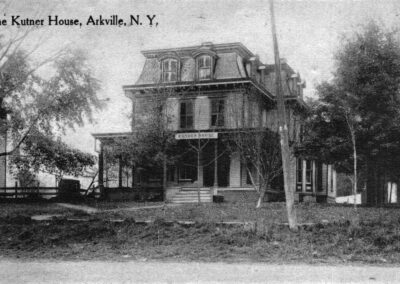 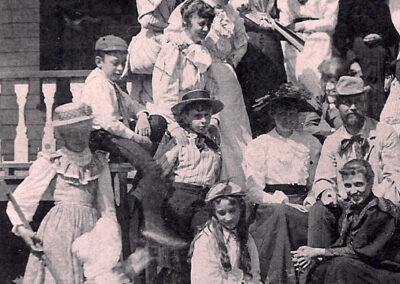 J. Francis and Adah Murphy and friends at their Pakatakan cottage

J. Francis and Adah Murphy and friends at their Pakatakan cottage 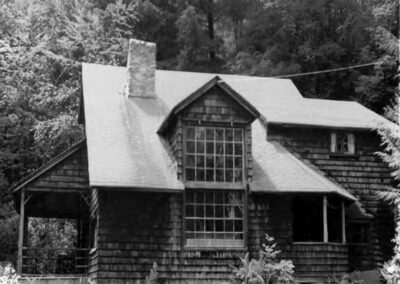 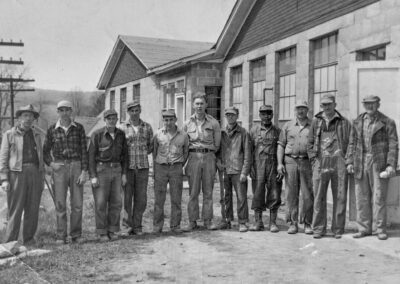 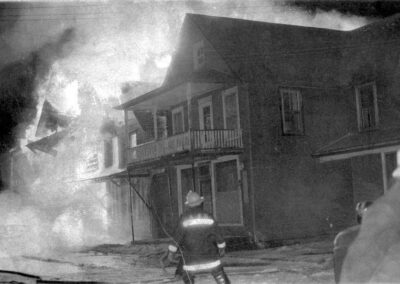