Halcottville (the ‘s’ was added only in the latter half of the 20th century) is named for a family that settled here on the banks of the East Branch in 1803. John Halcott was a Revolutionary War veteran who with his wife Letitia had 12 children. One, Mathew, became a prominent politician (he was town supervisor and a state assemblyman) and a businessman who took over the store his father established and also ran a woolen fulling mill in this community that became known as Halcottville in 1854. (The Town of Halcott in nearby Greene County was named for Mathew’s brother, George Washington Halcott, who was Greene County sheriff in the 1850s.)

The Kelly family arrived in the valley at about the same time as the Halcotts. Pioneer settler David Kelly built a wooden dam to create what came to be known as Lake Wawaka and to provide water power for a grist mill. The river was also used to power several other mills and to supply ice for refrigeration for creameries, farms and railroad milk cars (A massive, three story ice house once stood beside the tracks at lakeside – its foundation remains). 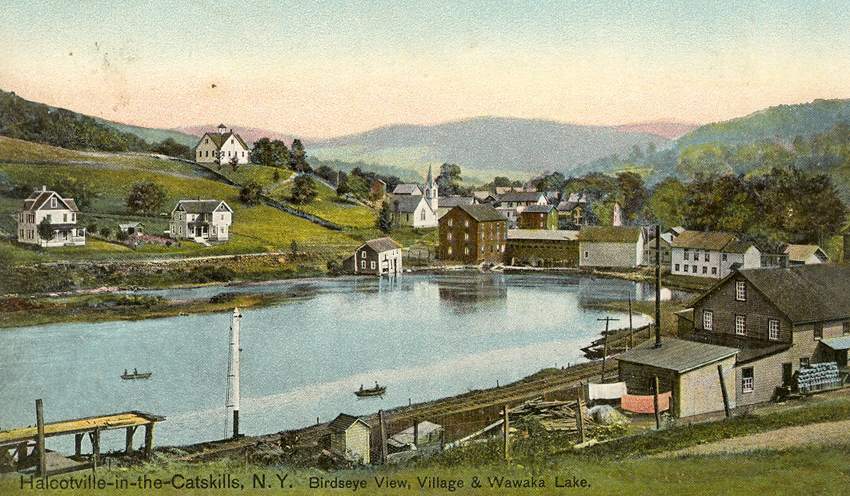 In the 1920s, the impounded lake was used to generate electricity for the Halcottville Electric Lighting Company, run by the Kelly Brothers, Guy and Nelson, who by then owned the lake and much surrounding farmland. 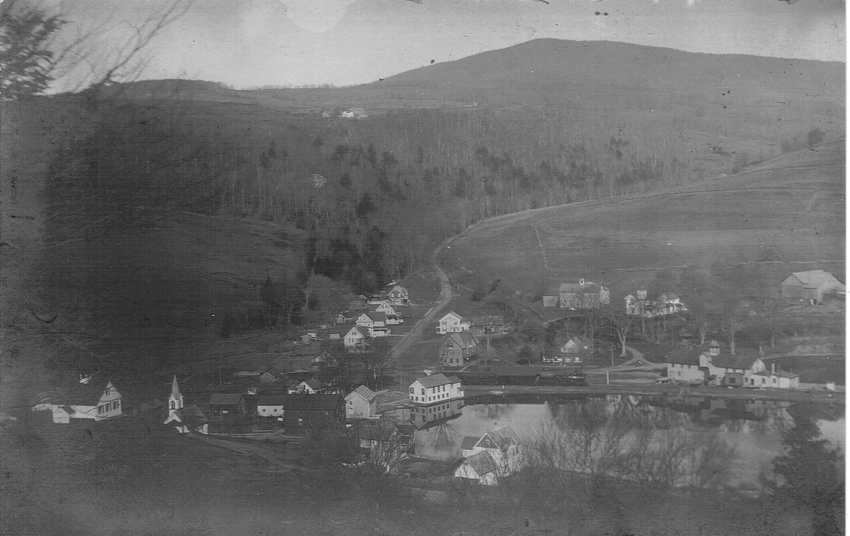 The hamlet grew up to service area farms, including those in Bragg Hollow, whose name is also shrouded in myth and mystery; in the 1869 Beers Atlas of Delaware County, the Hollow is labeled “Peaceful Valley.”

The first store is believed to have been established by John or Mathew Halcott around 1814. It was owned by a succession of proprietors until the Griffin family acquired it in 1880 and ran it until 1963. Nancy and Dick Finch then had the store and Post Office for the next three decades.

At one time, Halcottville was a busy place, with as many as six general stores, a tailor and dressmaking shop, a law office, shoe shop, meat market and a millinery store. The coming of the Ulster and Delaware Railroad in late 1871 not only aided businesses and farms, but spurred the tourist trade. The Hotel Hubbell operated in the 1880s, and the Union Hotel near the tracks opened in 1896. (The passenger end of the U&D depot now sits in the yard of the former Union Hotel, owned by the Truran family. The freight portion of the railroad station was moved to Arkville to become part of the Delaware & Ulster excursion railroad complex.)

Many farms also opened their homes to boarders in the summer months to supplement the dairy income. Travelers and locals enjoyed boating and picnicking at a lakeside park, and dancing at the Red Rose Hall. Two churches – Methodist and Old School Baptist – and a schoolhouse (District 26) were all built in the 1890s. Children prior to that attended District 1 school in Bragg Hollow, or District 6 school in Kelly Corners.

A water system, using the waters of Bragg Hollow stream, and a fire department were established in 1909-1910. In 2010 the fire department’s centennial was celebrated by re-opening for community use the newly refurbished Wawaka Grange Hall, once a vital part of life here.

The Kaufman Dairy and Ice Cream Company established a creamery beside the U&D tracks in 1895. This facility was sold to Sheffield Farms-Slauson-Decker Company which in 1915 built a new creamery that operated until 1959 and is still standing as part of a bed and breakfast and recreation enterprise operated by Jim and Susan Kelly.

A fascinating glimpse of life in and around Halcottsville from 1877 through 1928 is provided in “When the Trains Ran, The Diary of a Delaware County Woman,” by Mary Robinson Sive. It details the observations, family relationships and activities recorded by school teacher Jennie McKenzie Doland Hewitt. It can be found on the Delaware County Genealogy and History website. 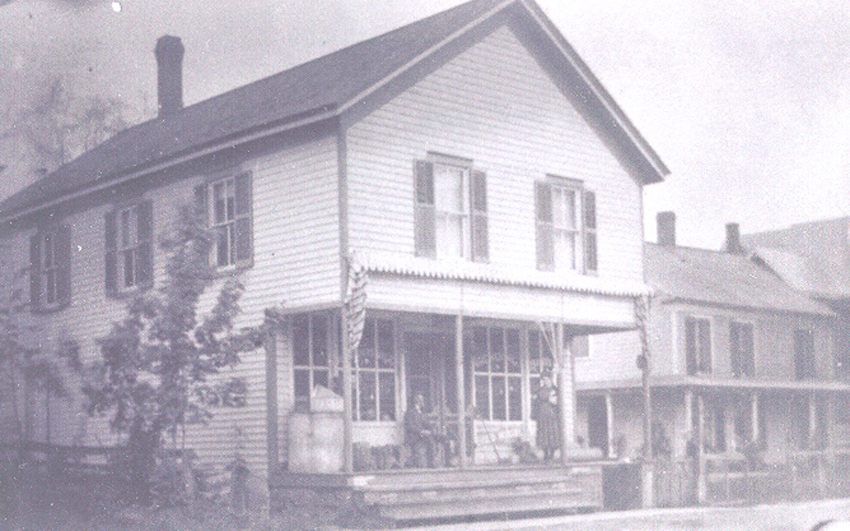 HALCOTTSVILLE PHOTO GALLERY
Click for a larger view of each image… 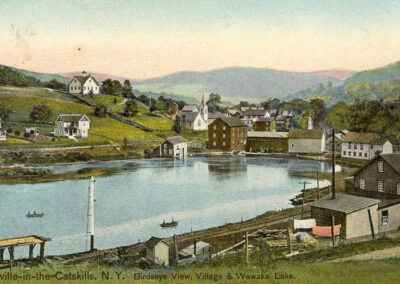 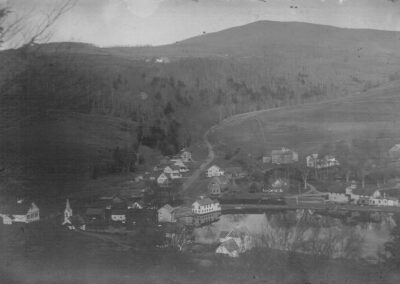 Post-1890s view of lake and hamlet, with train 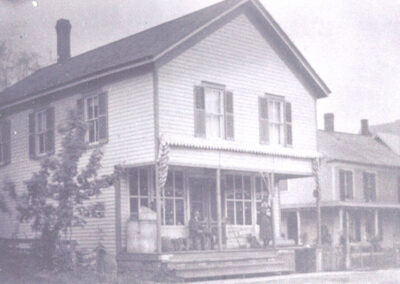 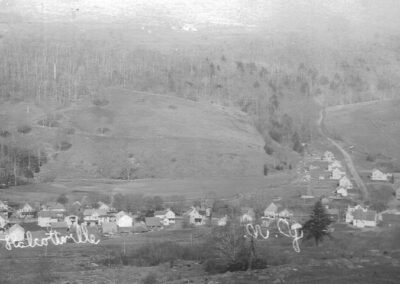 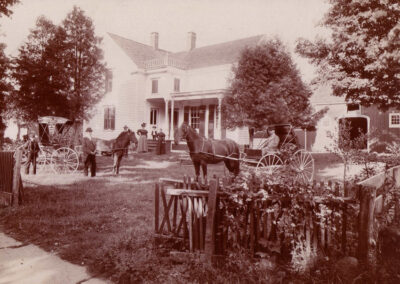 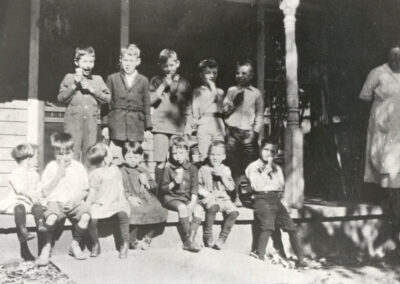 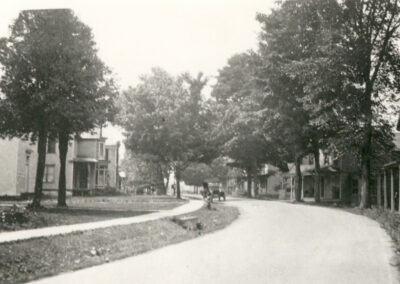 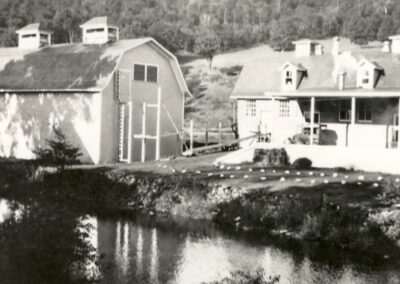 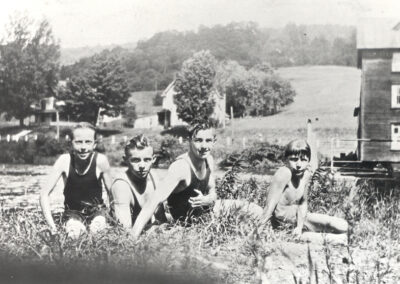